Another virtual quiz, another theme! This time the virtual quiz had a holiday and theme travel, and it was encouraged members should dress up in something appropriate. Some apparently (cough) didn’t get the message, but at least a few got into the spirit of things 😉

Everyone seemed to enjoy themselves with a variety of rounds. To start a geography general knowledge round, where it was revealed the massive gap between those who travel and those who don’t! Following on with a ‘Price is Right’ round guessing the price of the world’s most expensive foods. A $25,000 taco anyone?

The customary summer/holiday themed audio round certainly separated the pack, followed by finding out who all the alcoholics were in the group (yes that me as well). A few of us enjoyed the ‘animal race’ round, with plenty more looking completely perplexed!

Finally it was onto the famous wipeout round, where Mark decided to pull another blinding wipeout!

But it was well done to Zoe for reigning supreme (again!), winning a bottle of Prosecco and nominating the £60 raised to go to the Evesham Adventure Playground Charity. Baxter and Sophie also win three pre-mixed cocktails for wearing the best holiday outfit (you had to be there).

Thanks to Christine and Baxter for photos. There would have been more, but I was busy quizzing and drinking 😉 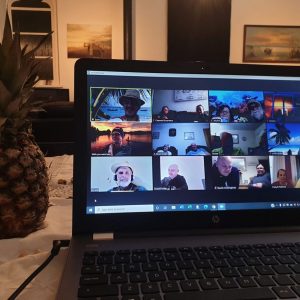 Baxter and Sophie reserving their spot…